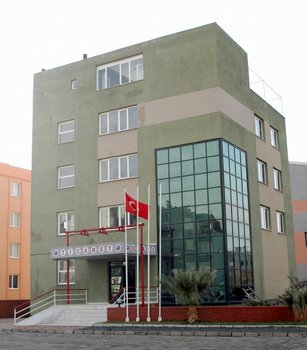 Aliağa has been Turkey's most important commerce and industrial zone from 1970s to 1990s. Aliağa Chamber of Commerce was established in 1991 and Commerce has began serving with 361 members in 1992 to serve the businessmen and industrialists to maintain professional discipline.

The main purpose of Aliağa Chamber of Commerce is to provide common needs of members, to facilitate their professional activities, to maintain professional discipline, moral values and solidarity so as to establish honesty and realiblity in the relations between the members and to render services as provided for under its statutory law.

In 1991, a group whic was headed by Adnan Saka, was started to work to establish Aliağa Chamber of Commerce in the fast-growing city. Then, there was created a temporary committee by the district governorship and Adnan Saka was appointed temporary president of the committee. Temporary members of the committee were Nazmi Kaya, Yusuf Savran, Osman Şimşek, Yahya Yavuz, Kasım Kayar, Ömer Çil, Ahmet Arlı ve Ahmet Kasap.

The temprorary committee completed the first election for the Aliağa Chamber of Commerce in the beginning of the November, 1991. The first assembly members were Arif AKYÜZ, Şahabettin YILDIRIM, Ahmet ARLI, Turgut OĞUZ, Rıza GÜRBÜZ, Hilmi GÜNER, Adnan SAKA, Ekrem TOKER, Mustafa AKGÜN, Sunday KAVAK-LIOĞULLARI, Necdet SEZEN and Haydar ARLI. Adnan Saka was the first Chairman of the Executive Board, Arif Akyüz as the first Vice President, Turgut Oğuz was the first Assembly President and Ahmet Arlı was the Assembly Vice President after the first election.